Cemetery History, Information and Burial Register located in this section  ( Burial Register as PDF document)
Cemetery Restoration Project:
This project has been an ongoing group effort that was started even before our Historical Society was. Upon the creation of the Township Historian position in Pittsfield Township and the appointment of Ralph Hayes to the position. Ralph took it upon himself to get this project moving to ensure this important part of our history lasts. As many who visit the cemetery might note weather, time and the 1965 Palm Sunday Tornado have done their damage to many of the older headstone.
Ralph and his group of volunteers decided that it was time to do something about the damage and started work to repair them. The group has done an amazing job so far to restore and protect these amazing markers of our history. All those who are interested in helping with this project either through manual labor, photographing the headstone or cataloging the headstones please join us.
To get more information about this project and how you can help please use "Contact" tab above. 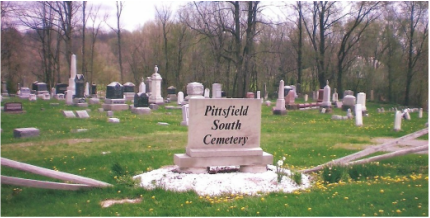 Situated on the east side of SR 58, 1/2 mile south of SR 303 just beyond the Hallauer Road intersection. 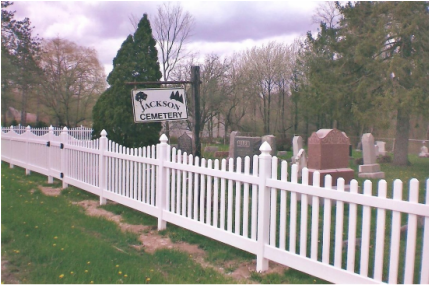 Jackson Cemetery Located on the north side of Webster Road, 2 1/4 miles east of SR 58, the land was purchased by the township trustees in 1848 from Orrin J., Norman B.  and Lucy Rockwood for a public burying ground. Many of the Jackson family are buried here. The first date on a stone is that of Daniel G. Saxton, 1837.  The Revolutionary War veteran Charles Rounds was buried here in 1843, age 84 years. 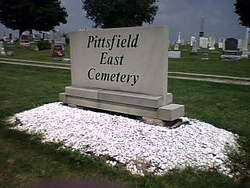 Pittsfield East Cemetery  located on the north side of SR 303, 1/3 mile east of SR 58.This was the first burying ground in Pittsfield township, started in 1834.
Pioneers from the May Flower buried in the East Pittsfield Cemetery (story below) 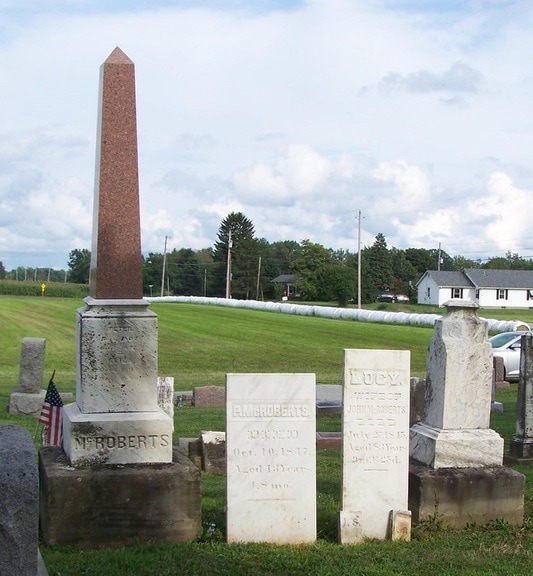 Lucy Bradford was a direct lineal descendent of William Bradford of the May Flower. She lived from October 7, 1761 (Springfield, MA) to July 27, 1845 (Pittsfield, OH). Lucy Bradford married John McRoberts around 1781. She had been widowed since 1813 at age 52. Her husband, John McRoberts, had fought in the Revolutionary War and was buried in VT. Lucy died at age 83 shortly after moving to Ohio from Vermont in 1845. Most of her children had left Vermont (David, James, Molly, Cynthia, Lucetta, Peter & Balzora) and moved to Ohio in the early 1830’s. It is unknown what held her in Vermont after all her children had moved away. She was the first of her family to be buried in East Pittsfield Cemetery. Her youngest son, Peter McRoberts died two years after her in 1847 and was buried next to her. In July 2010 the Pittsfield Twp Historical Society’s cemetery committee was performing maintenance and uncovered both Lucy and Peter’s original gravestones. These gravestones had been buried horizontally beside the monument of Peter & Eliza McRoberts, which held Lucy’s name and two of Peter’s sons, Charlie & Erwin. How long these original gravestones had been buried is unknown. The monument was most likely erected shortly after Erwin & Charlie died in 1870 & 1872. Both young men had served in the Civil War and later worked in the railroad industry. I suspect that Peter’s most prominent sons, Volney, Pitt and Henry McRoberts had the monument of Peter McRoberts erected and put five family names on it; Peter & his wife Eliza, mother Lucy, and sons Charlie & Erwin. The original gravestones had been buried beside the monument for about 140 years.
The cemetery committee erected both original gravestones next to the monument as shown above so that other descendants may view them.